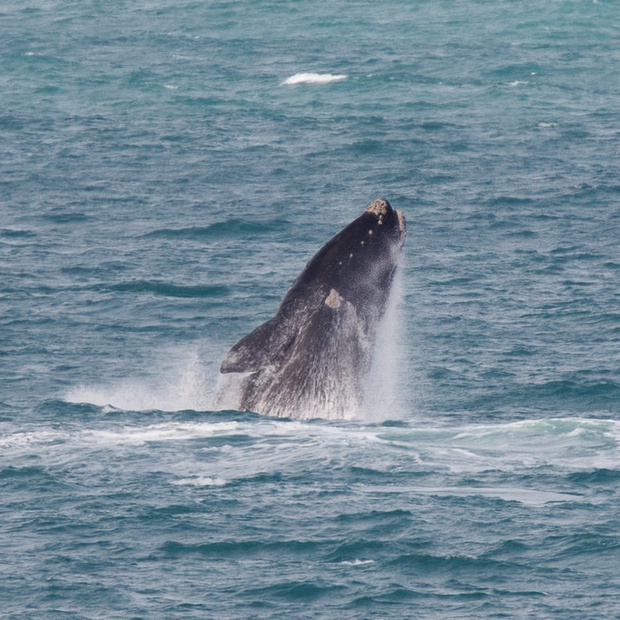 The Southern right Whale’s colour is black with occasional white markings, a long back and underside; the body is stocky and fat, smoothly rotund without a trace of dorsal fin or any ridge along the back. These bulky animals float higher on the water than other species of whales.

The Right Whale was so named because it was considered to be the “right ” whale to catch.
Rich in oil and baleen ( the large food filter plates, which hang from the roof of it mouth), and a whale which floated in the water when killed, this slow-moving leviathan became one of the most ruthlessly hunted of all species of whales.

Today, the northern right whale is virtually extinct. In the southern hemisphere populations show a slow increase since international protection in 1935. There are estimated to be about 3000 – 4000 southern right whales at present with South Africa receiving the major percentage visiting its coasts annually. They are still considered to be endangered.

Their tale can flukes some 6 metres across and they can blow 4 – 5 metres in a V-shape.An inverted whale lies motionless, holding flippers clear of surface. They migrate south during summer when supplies of krill are more prolific, andnorth during the winter to mate, calve and rear their young.They appear around our coastline from May to December, especially in the sheltered bays and coves close inshore and near river mouths.

Whales are large brained, and sensitive creatures. Strong bonds exist between females and their calves. In normal circumstances, they are non aggressive and gentle toward man. Research indicates that whales are of greater benefit to man alive than dead.